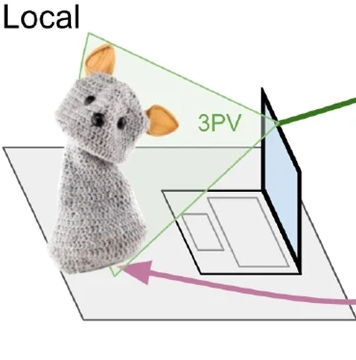 Suguitan M., and Hoffman, G. (2022).
What Is It Like to Be a Bot? Variable Perspective Embodied Telepresence for Crowdsourcing Robot Movements
Personal and Ubiquitous Computing
Full text
PDF

Movement and embodiment are communicative affordances central to social robotics, but designing embodied movements for robots often requires extensive knowledge of both robotics and movement theory. More accessible methods such as learning from demonstration often rely on physical access to the robot which is usually limited to research settings. Machine learning (ML) algorithms can complement hand-crafted or learned movements by generating new behaviors, but this requires large and diverse training datasets, which are hard to come by. In this work, we propose an embodied telepresence system for remotely crowdsourcing emotive robot movement samples that can serve as ML training data. Remote users control the robot through the internet using the motion sensors in their smartphones and view the movement either from a first-person or a third-person perspective. We evaluated the system in an online study where users created emotive movements for the robot and rated their experience. We then utilized the user-crafted movements as inputs to a neural network to generate new movements. We found that users strongly preferred the third-person perspective and that the ML-generated movements are largely comparable to the user-crafted movements. This work supports the usability of telepresence robots as a movement crowdsourcing platform.