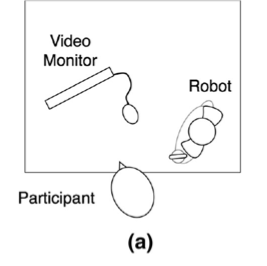 We propose the notion of robotic experience companionship (REC): a person’s sense of sharing an experience with a robot. Does a robot’s presence and response to a situation affect a human’s understanding of the situation and of the robot, even without direct human—robot interaction? We present the first experimental assessment of REC, studying people’s experience of entertainment media as they share it with a robot. Both studies use an autonomous custom-designed desktop robot capable of performing gestures synchronized to the media. Study I (n=67), examining music listening companionship, finds that the robot’s dance-like response to music causes participants to feel that the robot is co-listening with them, and increases their liking of songs. The robot’s response also increases its perceived human character traits. We find REC to be moderated by music listening habits, such that social listeners were more affected by the robot’s response. Study II (n=91), examining video watching companionship supports these findings, demonstrating that social video viewers enjoy the experience more with the robot present, while habitually solitary viewers do not. Also in line with Study I, the robot’s response to the video clip causes people to attribute more positive human character traits to the robot. This has implications for robots as companions for digital media consumption, but also suggests design implications based on REC for other shared experiences with personal robots.