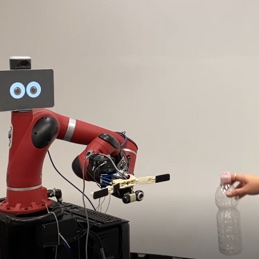 This paper investigates human’s preferences for a robot’s eye gaze behavior during human-to-robot handovers. We studied gaze patterns for all three phases of the handover process: reach, transfer, and retreat, as opposed to previous work which only focused on the reaching phase. Additionally, we investigated whether the object’s size or fragility or the human’s posture affect the human’s preferences for the robot gaze. A public data-set of human-human handovers was analyzed to obtain the most frequent gaze behaviors that human receivers perform. These were then used to program the robot’s receiver gaze behaviors. In two sets of user studies (video and in-person), a collaborative robot exhibited these gaze behaviors while receiving an object from a human. In the video studies, 72 participants watched and compared videos of handovers between a human actor and a robot demonstrating each of the three gaze behaviors. In the in-person studies, a different set of 72 participants physically performed object handovers with the robot and evaluated their perception of the handovers for the robot’s different gaze behaviors. Results showed that, for both observers and participants in a handover, when the robot exhibited Face-Hand-Face gaze (gazing at the giver’s face and then at the giver’s hand during the reach phase and back at the giver’s face during the retreat phase), participants considered the handover to be more likable, anthropomorphic, and communicative of timing (p<0.0001). However, we did not find evidence of any effect of the object’s size or fragility or the giver’s posture on the gaze preference.