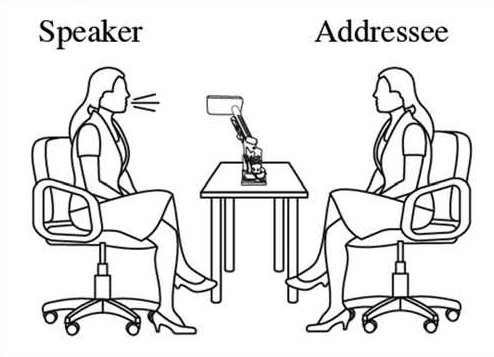 We presented a study testing the effect of a robotic object’s responsiveness on people’s interpersonal evaluation in face-to-face conversation context. Our results indicate that a responsive robotic object, performing minimal movement of “gaze” and “leaning” gestures, has a significant effect on HHI, and can improve the quality of the interaction between the conversation partners. Our work has implications for the HCI community. Researchers, designers, and practitioners in the fields of Human-Robot Interaction (HRI) and Tangible and Embedded Interaction (TEI) can leverage our findings by considering the potential of non-humanoid robots in HHI, and by designing and implementing responsive gestures for such non-humanoid robots. We showed that even minimal movement, with a simple mechanical design of two DoF, is sufficient to influence HHI, and is successfully accepted as a side-participant in human-human conversation. This opens up the opportunity for HRI designers to extend their designs into the non-humanoid domain, and for TEI designers to extend their interactive objects into the robotic domain. For the HCI research community at large, our findings show the need to further study the effect of “minimal responsive movement” in a wide range of human-human interaction use cases.