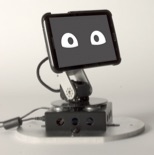 Robots are predicted to serve in environments in which human honesty is important, such as the workplace, schools, and public institutions. Can the presence of a robot facilitate honest behavior? In this paper, we describe an experimental study evaluating the effects of robot social presence on people’s honesty. Participants completed a perceptual task, which is structured so as to allow them to earn more money by not complying with the experiment instructions. We compare three conditions between subjects: Completing the task alone in a room; completing it with a non-monitoring human present; and completing it with a non-monitoring robot present. The robot is a new expressive social head capable of 4-DoF head movement and screen-based eye animation, specifically designed and built for this research. It was designed to convey social presence, but not monitoring. We find that people cheat in all three conditions, but cheat equally less when there is a human or a robot in the room, compared to when they are alone. We did not find differences in the perceived authority of the human and the robot, but did find that people felt significantly less guilty after cheating in the presence of a robot as compared to a human. This has implications for the use of robots in monitoring and supervising tasks in environments in which honesty is key.