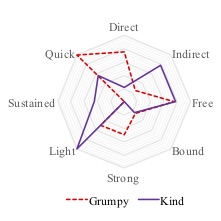 We conducted a co-design study with small groups of children in which they were asked to create movements for block-like robots according the robots’ personality. This study was done as part of a larger project entitled THE ROBOT–CREATIVITY PROJECT, whose goal is to create robots for groups of children to help boost their creativity through playful activities. 52 children (M=7.93 years old, SD=1.32, 48.1% female) participated in this study. They produced movements for six robot personalities along three axes: Extraversion, Openness to experience and Agreeableness. The produced movements were subsequently coded using the Laban Effort System. Based on 30% of the analayzed data, children chose to represent movements differently for different personality traits of the robot, providing a movement framework to develop robots for creativity stimulation.