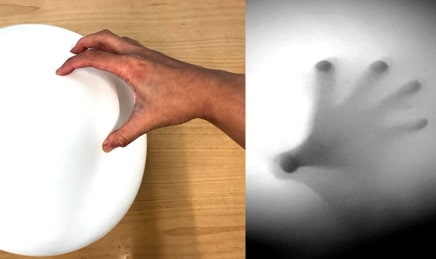 ShadowSense is a low-tech, low-cost touch sensing method to recognize touch gestures and touch positions on social robots in the hope of improving the robot’s awareness and promoting intelligent interaction behaviors.

A camera inside a robot’s body captures the shadows created by touching its skin, or even hovering over the skin, detecting both touch positions and social gestures. We use a a Densely Connected Convolutional Neural Network to recognize touch gestures from shadow images. In an experiment, we evaluated six interaction gestures: a palm touch, punch, two hands, hug, point, and nothing. The classifier was evaluated with three lighting conditions: daylight, dusk, and night. The results showed high accuracy in gesture recognition, between 87.5% and 96.0%, dependent on the lighting.

ShadowSense could provide a privacy-maintaining alternative to camera-based interaction with social home robots. By physically covering the robot’s eyes with a translucent material, as some users already do with their laptop cameras, a robot can still make use of some interaction data in the form of user’s shadows instead of high-fidelity images.