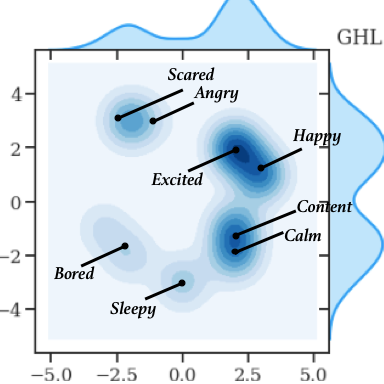 We evaluate the emotional expression capacity of skin texture change, a new design modality for social robots. In contrast to the majority of robots that use gestures and facial movements to express internal states, we developed an emotionally expressive robot that communicates using dynamically changing skin textures. The robot’s shell is covered in actuated goosebumps and spikes, with programmable frequency and amplitude patterns. In a controlled study (n=139) we presented eight texture patterns to participants in three interaction modes: online video viewing, in person observation, and touching the texture. For most of the explored texture patterns, participants consistently perceived them as expressing specific emotions, with similar distributions across all three modes. This indicates that a texture changing skin can be a useful new tool for robot designers. Based on the specific texture-to-emotion mappings, we provide actionable design implications, recommending using the shape of a texture to communicate emotional valence, and the frequency of texture movement to convey emotional arousal. Given that participants were most sensitive to valence when touching the texture, and were also most confident in their ratings using that mode, we conclude that touch is a promising design channel for human-robot communication.